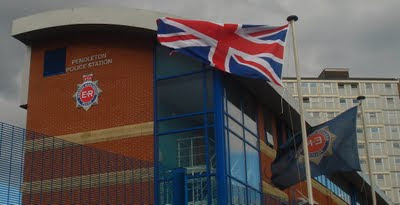 Salford Police Station
Right across Greater Manchester today there has been a series of male suspects arrested for suspected grooming on vulnerable teenage girls for sex.
The teenage girls were said to have been lured in with drink and drugs before being groomed for “Special Sex Party’s” across the streets of Salford.
The teenage girls were all said to be from care homes and troubled family’s from across Stockport up to 39 Girls have been interviewed by Greater Manchester Police as possible victims and eye witnesses.
200 Police officers carried out raid right across Manchester, 17 men were targeted following a four month probe into the paedophile ring.
Last year 11,819 children were reported missing last year and up to 2000 had come from the Stockport care homes.
Greater Manchester Police spokes person has said “alleged victims had told how they had been groomed by being bought a meal or taken on a night out.

After four of five weeks of 'affection and flattery', it is claimed, gang members would ask for sex - often after first giving the girls drink and drugs.

It is alleged they would also be taken to the 'sex parties' at flats and houses, where they would be exploited by other men.

It is understood some of the girls were first approached in parts of Manchester city centre, including Piccadilly Gardens, where they were visiting from Stockport”
“It was classic grooming - providing alcohol, drugs, and free food, consequently leading to sexual entrapment.

"I hope today's action shows people in Greater Manchester that the issue of sexual exploitation is one that we take extremely seriously.

"This is the largest ever operation carried out by the Major Incident Team and we have had teams of detectives, including one from Stockport, working on this investigation.”

RWB Spoke to Gary Tumulty British National Party Salford Organiser who said “Its absolutely appalling how such crimes can take place across such a wide area, Young girls from Stockport are being groomed and drugged and left open to alcohol abuse being brought in to my home town of Salford for special sex party’s, what the hell are the police and the social services from theses council’s doing to protect and safe guard our children, absolutely nothing it’s disgraceful. Details of the offenders have not yet been announced, but the police assure me they soon will be. Its time for the people in power and the law to protect our children… or we will”
Posted by Unknown at 08:53